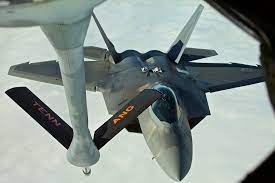 Northrop Grumman’s X-47B has become the first combat drone to be able to be catapulted and land back on an aircraft carrier; it has also been a pioneer in automated aerial refueling, and has made several “contacts” with the “funnel” basket located at the end of the flexible hose of a KC-707 Omega.

These tests, carried out as part of a broader Unmanned Carrier Launched Surveillance and Strike (UCLASS) program, are aimed to provide the US Navy with onboard combat drones. In 2016, the program was expanded to include the “Carrier-Based Aerial-Refueling System” (C-BAR).

The capability can go a long way to protect US aircraft carriers from anti-ship missiles, including the Chinese DF-21, whose real capabilities are yet to be known.

With drones being able to supply 7,000 liters of fuel 500 miles away from an aircraft carrier, makes striking the aircraft carrier harder to target. It also frees the F / A-18 Super Hornets from their so-called fueling missions.

“Nanny” missions, configuration for in-flight refueling, can represent up to 30% of their flight time.

Way back in 2018, Boeing was awarded a contract to carry out the C-BAR program; its MQ-25 “Stingray” drone, made its maiden flight the following year. The airplane maker has made rapid progress since then. Earlier this month on June 7, Boeing announced that an MQ-25 had transferred fuel to an F / A-18 Super Hornet, marking the first time in aviation history, that a drone has managed to refuel an aircraft in flight.

“During the first part of the flight, the pilot of the F / A-18 flew in close formation behind the MQ-25 to ensure its performance and stability before refueling,” said Boeing.

“Both aircraft flew at operationally appropriate speeds and altitudes. Once the evaluation was completed, and in complete safety, the MQ-25’s funnel basket deployed and the F / A-18 pilot ‘plugged in’ the drone to receive the planned fuel,.”

Before achieving this milestone, the MQ-25 T1 made 25 test flights, which opened up its entire flight envelope to tests, which were additionally supplemented by simulations carried out with numerical models.

“There is still some way to go before the MQ-25 can be deployed from the deck of an aircraft carrier” , said Boeing. More tests are scheduled in Norfolk to this end by the end of 2021.