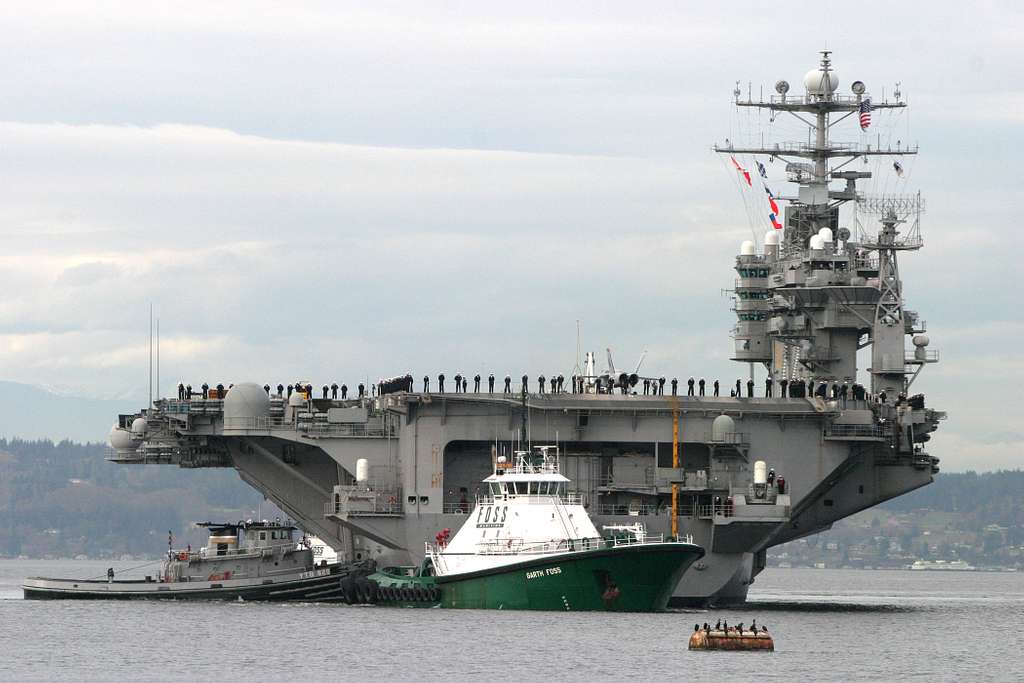 In this technology-driven age, a warship’s electronic warfare capabilities are as important as its kinetic capabilities when it comes to protecting itself from enemy attacks.

To this end, in recent years, a host of new systems, which naturally remain highly ambiguous in terms of their capabilities, have made appearances on American destroyers and cruisers.

Recently, a new system has been spotted on two supercarriers, the USSAbraham Lincoln and USSCarl Vinson, both of which are headed out into the Pacific.

The new weapon system in question is mounted at three locations around the perimeter of the Nimitz class supercarriers and appear to provide a near spherical coverage around the ship, much like the carrier’s other defenses. This includes an installation on the fantail as well as on the two opposite sides, amidships.

The enclosures appear to be have swiveling capabilities, at least horizontally, and

Incidentally, these Nimitz class supercarriers are already equipped with variants of the AN/SLQ-32 Surface Electronic Warfare Improvement Program (SEWIP) electronic warfare system; some of them are also equipped with the shadowy AN/SLQ-59 system, with experts opining them to be of interim application.

According to field experts, this new weapon system is likely to be a new powerful active electronically-scanned array (AESA), which may have been potentially adapted from a fighter’s radar; it is likely to help execute pinpoint attacks on incoming threats that use radiofrequency (radar) homing or leverage the RF spectrum at all to accomplish their terminal attack runs.

Such a system is likely to have secondary capabilities, including working as a radar and communications node. For instance, the new SEWIP Block III leverages its AESA arrays for secondary purposes.

It is also entirely possible that one of those roles played by this system is to enable an electronic attack, as an ancillary capability.

The closest thing that looks similar to its is South Korea’s SONATA SLQ-200, which includes a large cabinet-like enclosure with a pair of powerful arrays on both sides housed in a round radome. This system is used for jamming incoming anti-ship missiles and for conducting other electronic attacks.

It is also possible that this could be something entirely different, such as a high power microwave system.

With the US Navy continuously upgrading its aircraft carrier with new configurations, the addition of new systems is not uncommon.