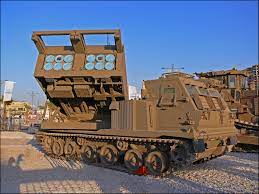 Bahrain has allocated $176 million towards upgrading its M270 armored, self-propelled, multi-rocket launcher (MLRS) along with its associated MGM-140 Army Tactical Missile System (ATACMS). It will be purchasing the same from the United States, states an announcement by the US Defense Security Cooperation Agency (DSCA); the US Congress has been notified.

With this defense acquisition, Bahrain will be updating 9 missile systems; its existing M270 will be updated to a M270A1 configuration.

According to the DSCA, the process of upgrading Bahrain’s weapons systems will include the supply and integration of fire control systems, an improved mechanical launch system, new engines, electronics, cooling, transmission, communications systems, etc.

The $176M value of the deal includes spares for the next two years training, testing, integration, maintenance, etc. The primary contractor for the deal is Lockheed Martin Corporation, Bethesda, and MD.

Upgrading these weapon systems will improve the combat effectiveness and respond to threats by Bahrain in the Persian Gulf.

Incidentally, the US considers Bahrain a NATO ally and views it as critical towards political stability in the Middle East.

Designed in 1977, the M270 has been in service since 1983. The MLRS is used by many countries including France, US, Bahrain, Egypt, Germany, Finland, Israel, Greece, Japan, Italy, Turkey, South Korea, among other nations.

While production of the M270 was discontinued in 2003, upgrades to existing variants continue.

With a weight of 25 tons, the 7 meters long M270 is manned by a crew of three people. It can shoot rockets and missiles with different frequencies.

Depending on its modification, its typical operational range is between 32 to 70 km.

In 2005, the US Army upgraded the M270 to M270A1 and incorporated an improved fire control system (IFCS) along with an improved launcher mechanical system (ILMS). Both upgrades allow for significantly faster launch procedures and the firing of new types of ammunition, including GPS-guided missiles.