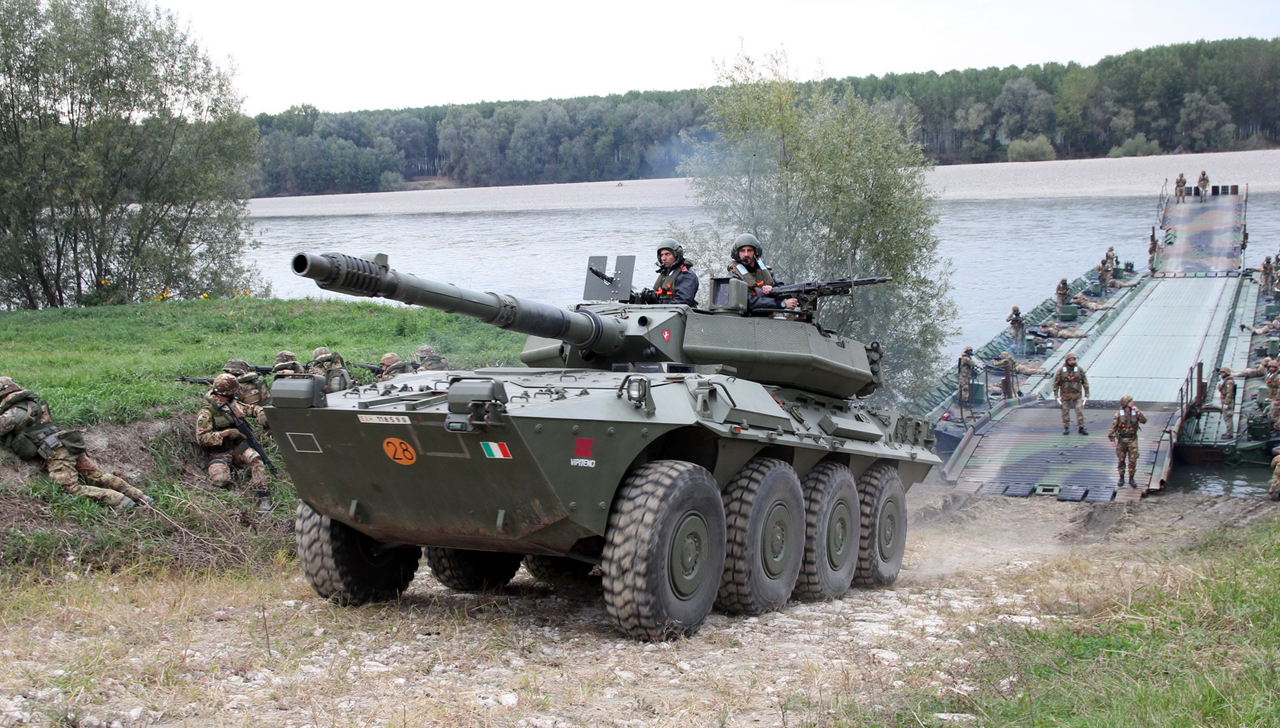 Italy’s latest tank, the Centauro II, was on display at a test range with the Italian parliament continuing to debate whether to fund the project. Among the guests at the Cecchignola Army range was Deputy Chief of the Defence Staff Lt. Gen. Danilo Errico and Leonardo CEO Mauro Moretti, who had all come to watch a prototype of the wheeled tank being put through its paces.

The Italian Army hopes to purchase at least 150 of the vehicles, which if approved will be a joint venture between Leonardo and Italian truck-maker Iveco. Managers of the companies and generals watched the tank as it tackled ditches and climbed steep hills.

Featuring a 120mm cannon, along with digital communication setup, the tank is powered by a 720 horsepower engine; the new Centauro II is bigger and more powerful than its predecessor, the Centauro, which it aims to replace.

Speaking at the event, Italy’s Army procurement chief Lt. Gen. Francesco Castrataro stated, the lightweight tank fits well into the service, since it allows the creation of medium brigades revolving around the Centauro’s stablemate – the new Freccia armored troop carrier.

“The new Centauro is a tank destroyer which protects troops, rather than a tank, which would be weigh[ed] in at double the maximum 30 ton weight of a Centauro,” said Castrataro.

He went on to add, “It is essential to combine the new Centauro with the Freccia, which is a troop transporter. It is agile, flexible and can do more than 100 [kilometers per hour] on a road,” he added. “This vehicle is cheaper, lighter and more flexible than a tank, with the same destructive power as a tank.”

The eight wheels of the new light weight Centauro tank extend further out from the hull giving it additional stability compared to its predecessor.

“The second reason is that any mines triggered by the pressure of the tire will detonate further from the hull,” states a statement from Leonardo and Iveco.

Castrataro stated, the old Centauro lacked the digital capabilities to work alongside the Freccia, which was introduced in 2009.

“We need both the Freccia, with its 25mm gun, and the Centauro, with its 120mm gun, working together on the battlefield. The new model allows this,” said Castrataro.

The newer lightweight tank is also more efficient that its predecessor. Designed to function in temperatures ranging from -32 to 49 centigrade, the 24HP Centauro II engine provides more horsepower per ton compared to its predecessor, which it aims to replace.

It also comes with an extra padding of armor to protect soldiers from blasts and features seven cameras that are mounted on its hull.

The future of the lightweight tank is in the hands of Italian lawmakers who are debating whether to approve a $582 million (€530 million) for the first tranche of 11 pre-series Centauro II tanks along with 39 production vehicles and 10 years of logistics service.

According to Castrataro, if Italy could export 200 of these lightweight tanks, the Italian Ministry of Defence could recoup its €46.8 million investment thanks to royalties.

In the past, Italy has launched ambitious multiyear procurement plans, only to see annual budgets take unforeseen cuts, leaving the plans in disarray. To mitigate such issues, three-year budget plans have been introduced but yet again, it has fallen short given a drop in funding levels.

This year, launch-funding for the Centauro II stood at only €9.4 million, with the onus to find the remaining balance of €530 million placed on the planners in the coming years. Already funding for a second planned brigade of Freccia is lagging behind.