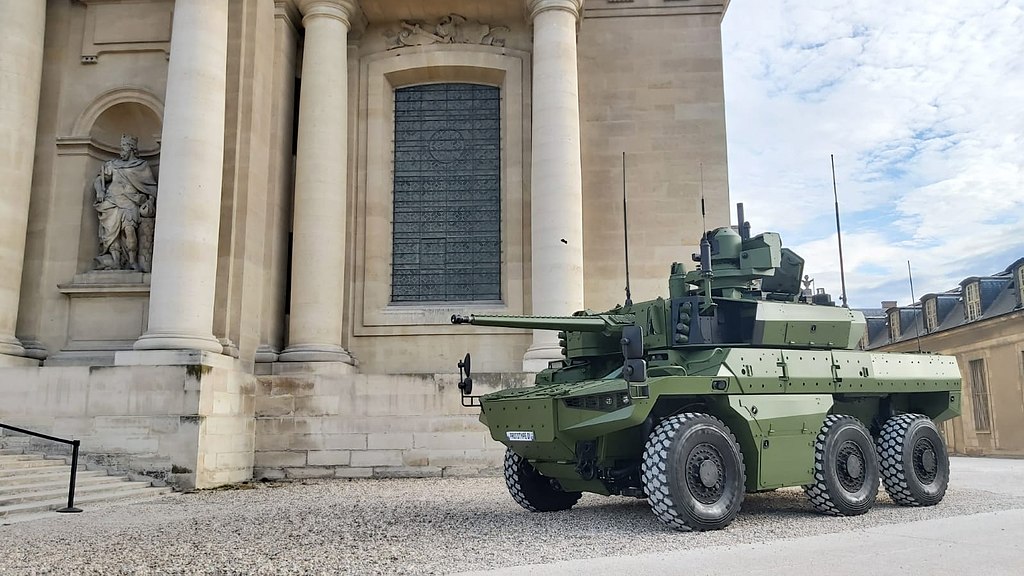 Warfare is evolving. The land sector, like the naval and air sectors, has moved from a juxtaposition of equipment used in a coordinated manner, to a global systemic approach, integrating complete weapons systems. Armed forces must, therefore, be able to count on manufacturers who have integrated this strategic dimension into their processes. In France, a country contributing significantly to the stability of a strategic Europe, the Air Force can count on Dassault, the Navy on Naval Group — for the Army, the industrial is Nexter.

The evolution of land combat

The very nature of war is changing. It is no longer the era of battalions engaged in the mutual attrition of one another’s mechanized forces over swathes of the European countryside. Advancements in key areas of technology are reshaping conflict, and by extension the battlefield. This demands not that an increasing number of capabilities be used alongside one another, but an integration of total systems capable of coordinated multi domain operations. This will be what separates first tier and second tier militaries in future land warfare.

The digitization of war has arrived. Threats are now being leveraged from cyberspace, electronic warfare capabilities (1), and the weaponization of information itself. The largest breakthrough innovations to come are almost certainly going to be in the fields of cyber and communications systems. Indeed, even the use of social media in the domain of war (2) is no longer theoretical, as operations in Syria and Libya have shown.

As a result of these developments, the nature of war will almost certainly change dramatically. General Stephen J. Townsend, of the US Army, argues (3) that the analogy of the iPhone is a fitting one here. The component technologies which comprised the iPhone were not particularly ground-breaking; however, the way its features were integrated, their combination in one unit ushered in a new class of technological product. This opened the door to radical changes in how people and businesses operate in society. Digital era war will be no different. The kinds of system integration that will soon be seen on and off the battlefield will therefore alter how war is conducted in an equally substantive way.

The imperative now is to develop “systems of systems” capable of tackling a set of missions and threats in a synchronized manner, and of responding to them with the ideal means in the time and place of their occurrence.  Systems of forces equally capable of evading the adversarial actions when the balance of power — qualitative or quantitative — is unfavorable. This requires a collective intelligence and an interconnection of means and men so that the land force acts and reacts as one.

Understanding and realizing the vision

Nexter enjoys close proximity with the customer through insertion in an ecosystem that combines the other land defense industrials, for instance, GICAT (4) link, the French Land and Airland Defence and Security Industries Association. The Eurosatory exhibition showcases every two years the depth and richness of this military ecosystem in full. Equally, Nexter fosters close ties with the French Army, through direct contracts and ad hoc structures, including a number of laboratories; as well as sharing understanding with the French national procurement agency, the DGA, which expresses its needs and validates the new equipment provided by the company in meeting the army’s requirement. Taken together these connections represent a network that positions Nexter uniquely for understanding the trends and needs of the defense sector.

Nexter also embraces its role in the evolution of warfare, modelling this need for development in its own operations. Over the years, it has transitioned from a purely national specialized equipment manufacturer of guns, vehicles and ammunition into its modern-day incarnation, a total systems integrator within KNDS. The company’s philosophy does not primarily consist in constantly improving existing designs, as most of its competitors do, but in rethinking — together with military customers — the art of land warfare from a system-of-systems perspective. And it does so now alongside its German counterpart, KMW. From another perspective, this partnership is becoming all the more important in the global context of increasing misalignment with the US and the UK. As defense and security specialists Alice Pannier and Olivier Schmitt write (5), “a key uncertainty is the evolution of national populism in the United States and United Kingdom.” They insist that in such a context, “the shape of the relationship with Germany will be critical for the evolution of French and European security policy.”

Examples of how Nexter is carving a new path in the digital era are its recent innovations in interactive and integrated digital solutions for optimized operational readiness within the Scorpion program, such as the FINDMP digital sandbox (6) operational planning tool. Other examples showcased last year in Orlando include the FINDERS C2, an operational information system for sharing maneuvers in real time throughout the entire chain of command, and an exo-helmet system, FINDADFI, a plug-and-play display and tactical information solution for individual soldiers.

Nexter’s idea of collaborative combat (7) is a vision from the future : the digitized Scorpion program is the most complete evolution of land warfare yet. It is comprised of four vehicular components: three new armored vehicles, the Griffon, the Jaguar, and the Serval, along with the modernization of the Leclerc. The other side of the program is the more significant: the network and digital dimension. This includes the SICS information system and the operational readiness system. These last two components herald a new epoch for conflict: one of network centric warfare.

Results that reflect the investment

Ultimately, these weapon platforms are secondary: more significant is the way the Scorpion program will standardize and help to coordinate the battle group. The information and command system greatly enhances the reactivity and flexibility of the whole.

Equally, the Scorpion system fits perfectly with France’s needs in terms of versatility of use. Taking into account the legitimacy of the French military leadership in Europe, which stems from both the country’s very active foreign policy, and its multiple military commitments and the lessons learned from them —the addition of the Scorpion program suggests that a strategically independent Europe could soon be more than aspirational.

Testament to the success of Nexter’s strategy, the KNDS Group was able to book a confirmed order intake of €4.4 billion in 2019 (8) a 25 percent increase over the previous year. The order backlog grew by 23.5 percent and stands at €9.6 billion.

The international community seems to have real interest and confidence has such confidence in the Scorpion program; so much so that France’s neighbor, Belgium, has already shown interest (9) in buying the system prior to it being operational. This is an indication of how highly prized Scorpion’s native interoperability is.

With each component of the system, Nexter has kept many of the French Army’s doctrinal priorities of understanding, cooperation, influence and command performance fully in mind. The Jaguar (10) for instance, is not a stand-alone vehicle, but a sensory platform, as well as the armed arm of a Scorpion battle group. The vehicle packs a decent punch (11) with a 40mm CTC cannon, along with two MMP mounted missile launchers, an MBDA state-of-the-art system which outperforms any of its competitors (12) such as the US Javelin or the Israeli Spike. However, the sheer volume of sensory equipment underlines the central goal of the program, to bring far greater levels of situational awareness to each member of the force, and to democratize this information across the battle group through Scorpion’s C4i capabilities.

When AI decision-making and coordination of strike capabilities reaches the digitalized battlefield, Scorpion is ready, well-prepared for the next chapters in modern warfare. Highlighting industry confidence, Nexter has been selected as part of KNDS to develop MGCS, the most ambitious heavy armored program to date. This recognizes the group’s capacity for innovation, having already hit hard with the Leclerc, the world’s most compact 56-ton main battle tank, along with the first tank turret with a digital bus (13), and the group’s work on non-explosive reactive armor (14).

Basically an analyst in the high-tech industry sector, Andre Ricardo is now a freelance consultant, producing studies on defense issues. His latest engagements have led him to focus on European affairs.