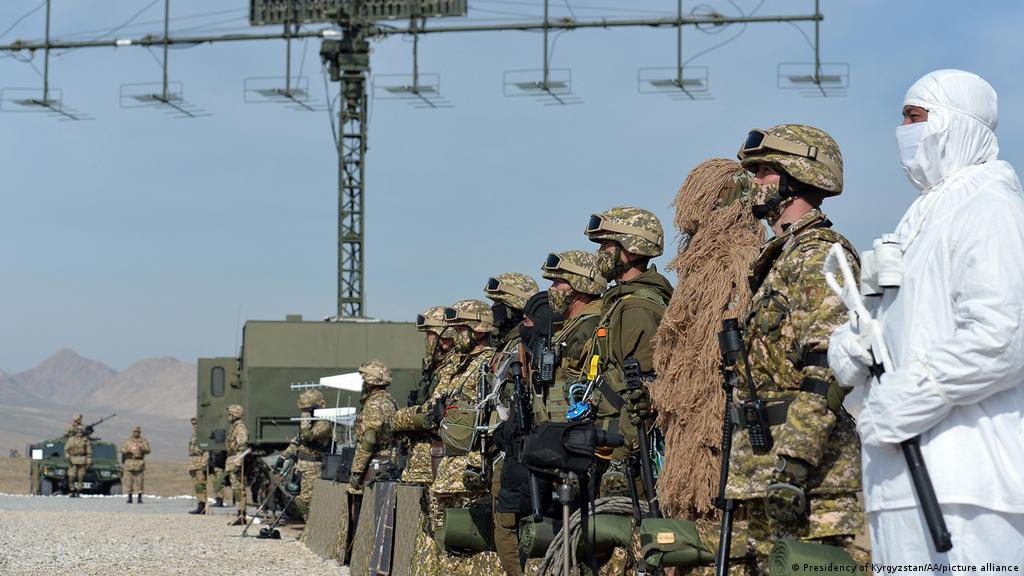 In a statement Russia’s Central Military District (CMD) stated, 300 troops along with 60 pieces of equipment have moved to Kyrgyzstan for the CSTO Rubezh-2021 maneuvers.

“Up to 300 servicemen and more than 60 pieces of equipment will be attracted by the Russian contingent,” said the statement from CMD.

The maneuvers in Kyrgyzstan take place against the backdrop of US departure from Afghanistan where Pakistan-backed Taliban has seized power.

In this backdrop, Russia has sent its mountain motorized rifle brigade from Tuva to Kyrgyzstan for training.

“Military contingents from the Kyrgyz Republic, Kazakhstan, and Tajikistan will take part in the exercise,” said the Central Military District in a press release.

“During the exercise, Russian servicemen will develop the preparation and conduct of a joint military operation to block and destroy conditional illegal armed groups that have invaded the territory of a member state of the Collective Security Treaty Organization,” said the Central Military District.

Earlier, Colonel-General Alexander Lapin, the commander of the Central Military District  had announced that during the summer training period, nine joint international exercises will be held in Russia, Kyrgyzstan, Tajikistan, and Uzbekistan, with the main event in these joint training exercises being anti-terrorist exercises.

Earlier this week on Monday, the Central Military District said, the maneuvers of the Russian military will involve live fire on a range in the mountains of Tajikistan.

“Commanders of all levels perform tasks of organizing a combined weapons battle with the practical implementation of live firing of weapons of armored personnel carriers BTR-82A, automatic and hand grenade launchers AGS-17, RPG-7B, as well as small arms at a distance of up to 1.5 thousands of meters,” said the district in a statement.

The Collective Security Treaty Organization (CSTO) is slated to conduct maneuvers in Kyrgyzstan and Tajikistan later this fall which will see several thousand servicemen participating in the exercises, said CSTO’s spokesman Vladimir Zaintedinov.

He went on to add, the Search-2021 exercise with the intelligence forces of the armed forces of the CSTO member states, the logistics units “Echelon-2021” and the Collective Rapid Reaction Force “Interaction-2021” will be held in Tajikistan in October near the border with Afghanistan.

In November, it also plans on conducting a special tactical exercise “Cobalt-2021” with special units of the Collective Rapid Reaction Forces of the CSTO. The exercise will also include tasks to suppress the activities of illegal armed groups.

The CSTO includes Russia, Belarus, Armenia, Kyrgyzstan, Kazakhstan, and Tajikistan, which chairs the organization this year.