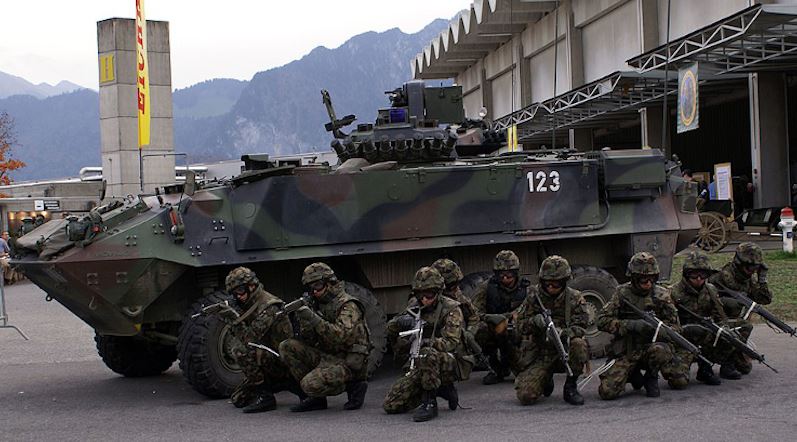 As the West rediscovers the art of mountain warfare, in modern war theatres, experts are once again examining the military of Western Europe, where the art of mountain combat was patiently studied and built, over the years. And, in the centre of Europe, quietly lies perhaps the world champion of this specific art: Switzerland. In its long and spotless history of defensive capabilities, warring nations can find many lessons, still very much valid today.

Mountain warfare is not regular warfare

In many ways, the job of soldiers is very different from that of mountain soldiering – to the point that many from mountain units consider themselves mountaineers first, and soldiers second. Of course, it’s still a game of carrying heavy rucksacks and warding off enemies, but the environments are so vastly different that it’s only a small stretch to call them two different jobs. Movements are slower, distances are skewed, daylight behaves entirely differently, bullets travel further in the thin air, and tracks can simply not be concealed in the snow. These are just a handful of parameters which make mountain warfare so specific. And, as the environment changes, so must the equipment deployed in it.

The US Army headquarters doctrine stipulates that “Ground movement of field artillery is often limited to traveling on the existing road and trail networks and positioning in their vicinity. Towed field artillery may require forward displacement of gun sections by helicopter to provide forward troops the necessary support“, highlighting how distances and movement must be apprehended in a completely different manner, when operating on mountainous terrain such as Switzerland.

Because mobility and adaptation to the terrain is so crucial, the Swiss train their soldiers accordingly and make sure their equipment is flexible and adaptable to any given tactical situation. In any given tactical scenario, the Swiss plan to count on mobility and terrain knowledge to harass enemy forces relentlessly and constantly reposition their forces to keep the defensive initiative.

US Army commanders committed this mistake – or rather realized they committed it – in Afghanistan, when their enormous, bulky, super-sophisticated and expensive Abrams tank revealed itself nearly useless, on the mountainous battlefield.  Alas, US self-propelled howitzers (Paladin)  were quite similar in their design : sophisticated, slow, expensive and bulky. As a result, heavy firepower was easily identified and avoided by insurgent forces, and slow or impossible to displace and redeploy according to enemy movements.

The Turkish Army ran into a similar problem facing the rugged and basic Kurd army. Turkey purchased the German Leopard 2 tank, known as one of the most technologically advanced main battle tanks in the world, in 2005. The Leo 2 has met substantial success, commercially speaking, but had barely been battle-proven until now, and the test of fire did not go well for the super-tank. Because the design made sense in the lab, buyers assumed the tank would be relevant in the battlefield – but crafty and nimble insurgent units quickly overcame the bulky and inadequate beast on the battlefield, causing huge embarrassment in Berlin.

The Swiss, as keen military observers, understand that predicting the next war is an impossible task. Going for military high-tech works only if the next enemy is of the same nature: a battle of research laboratories will then occur. Simpler equipment, on the other hand, will remain relevant, whichever the future enemy.

Europe under pressure: the consequences of the war in Ukraine on defense markets