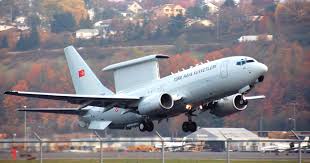 Cash strapped Britain is likely to cut orders for the Boeing E-7 Wedgetails, an airborne early warning and control aircraft, in what potentially is the first confirmed victim of the government’s upcoming integrated defense review.

Negotiations between Britain’s Ministry of Defense and Boeing have been underway since mid-summer over the potential trimming of Wedgetail numbers from five to three, as part of a cost cutting measure.

Media reports in Britain have been full of grapevine with full blown leaks about potential cuts in the defense budget and delays in procuring equipment such as fighter aircraft, surface warships, support ships, armored vehicles, and artillery.

While earlier the Ministry of Defense (MoD) had brushed aside these leaks as speculation, some of which were most likely leaked out by the MoD itself to test the waters of political and public acceptability, this time though its response was more measured. Replying to The Times newspaper in a tweet, on September 22, 2020, a spokesperson for the MoD tweeted pretty much confirming that budgetary cuts in defense were under consideration.

“We regularly discuss equipment programs with our partners, particularly when it comes to making savings and cutting costs, where appropriate,” said the tweet.

When requested to comment on the matter, a spokesperson for Boeing in London said the company “doesn’t comment on commercial matters.”

According to Howard Wheeldon, a defense consultant at Wheeldon Strategic Advisory, with the RAF having just three Wedgetails would leave the UK seriously short of aerial command-and-control and situational awareness capability.

“Personally, I regard this as little short of insanity. … To guarantee  27/7 capability requires that the UK has a minimum of five airframes. Potentially reducing the number to three would have very serious consequences and if this really has already been decided it needs to be reconsidered very quickly. Assured 24/7 AWACS capability is not just an option – it is an absolute necessity,” said Wheeldon.

To make matters worse, the potential reduction in Wedgetail numbers is not the only potential ISTAR capability cut in the cards. The RAF is also on track to remove the Sentinel battlefield surveillance aircraft, procured from Raytheon, next year.

Earlier last year, the MoD had signed a deal worth £1.5 billion for five Wedgetail airborne early warning aircraft for the RAF with deliveries starting in 2023. The final platform was scheduled to be handed over in 2025. The order became controversial since the order was placed without competition.

The Wedgetail airborne early warning aircraft is scheduled to replace the RAFs outdated Sentry E-3D’s, whose capability has further been limited due to under-investment going back several years. The order for Wedgetails was designed to restore the availability of high-quality airborne early warning to the RAF by at least mid 2020s.

To this end, the company had signed a deal with STS Aviation to modify a 737NG commercial aircraft used for Wedgetail to an AEW configuration at a hangar on Birmingham airport in England.

Work on stripping out two second-hand airliners has already got underway in the United States ahead of the Wedgetails being transferred to the UK, where the modification effort will generate more jobs.

Although the Wedgetail is not operated by the U.S. military it has expanded its secured export market to Turkey, Australia, and South Korea. Incidentally, the bulk of the RAF’s equipment are procured from the Australian defense industry.

The move to potentially trim orders for Wedgetails comes at a time when the British government is taking a closer look, in its own words a “fundamental” review, of British defense, security, foreign policy and overseas development.

The review comes at a time when Britain’s economy is being hammered by Brexit as well as the coronavirus, which emerged from Wuhan, China, and it is likely that the country will find, if anything, in the way of additional funding for the MoD, whose budget already faces significant funding issues.

If Britain wants to make these costly upgrades for its armed forces, it will have to make sacrifices elsewhere. It is in this perspective that the procurement process should be seen, since in most likelihood, it is in Cummings’ cross hairs along with other conventional capabilities such as boosting the number of army personnel or upgrading its main battle tanks. The review, likely to be around mid-November, is likely to be a bloody affair.

According to an industry executive who preferred the cover of anonymity, the outcome was likely to be more bloody than the 2010 strategic defense and security review, which saw Britain chop out defense capabilities such as army personnel, aircraft carriers, maritime patrol aircraft and fighter jets.

Wheeldon went on to add, it would be a mistake to imagine that the integrated defense review is about building Britain’s defense capabilities, in fact it is quite the opposite.

“If anyone really is still under the illusion that the underlying intention behind the 2020 ‘Integrated Review’ process – that of forming a soundly based long-term strategic decision making process of where the UK wants to be in the future, why and what defense and security capability will be required to meet those ambitions – let them now understand that the reality is that what eventually emerges will primarily have been about further cutting of UK defense capability at a time when others, including our adversaries and would-be enemies, are increasing their expenditure in the sector,” said Wheeldon.