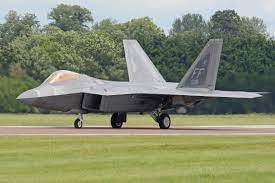 Santos Cáceres, a military aviation photographer has managed to capture a rather interesting shot of the US 5th generation stealth fighter F-22 Raptor while it is taking off from the Nellis Air Force Base in Nevada.

The photo shows the F-22 Raptor covered with carefully placed metal coating, which looks similar to tiles. This “normal skin” has been applied precisely so as not to interfere with key access points of sensors on the fighter jet, including critical areas such as antenna.

According to military experts, such a metal coating has not been seen so far on such a class of aircraft by the US Air Force. This could probably be the testing of a new coating. So far, it is not clear to what purpose the metal coating serves.

Military analysts have point out that this isn’t the first time that US engineers have tested such components: in June 2020, test flights of Scaled Composites Model 401 “Son Of Ares” also attracted attention of military analysts since the aircraft was covered with a reflective metal coating.

At that time, experts debated on their use with opinion varying from advanced infrared sensors to them being used for laser guidance weapon systems.

Theories of infrared search and tracking systems [IRST] could have some basis since it is known that the US military is in the process of conducting various tests of such systems. Among military analysts, it is a well accepted that in the future, laser and infrared systems will become the norm on the battlefield. Dozens of unmanned aerial vehicles are under development and are being testing under various conditions using these technologies..

There are good reasons to believe that the F-22 Raptor could be part of such test programs.

The F-22 Raptor often encounters cold thin air, as it flies at altitudes above 60,000 feet (18-19 km), and often in the upper atmosphere. According to experts, tests at such altitudes are relevant to the innovations being tested on the F-22 Raptor. If they weren’t the Pentagon would have used F-15 or F-16 fighter jets.