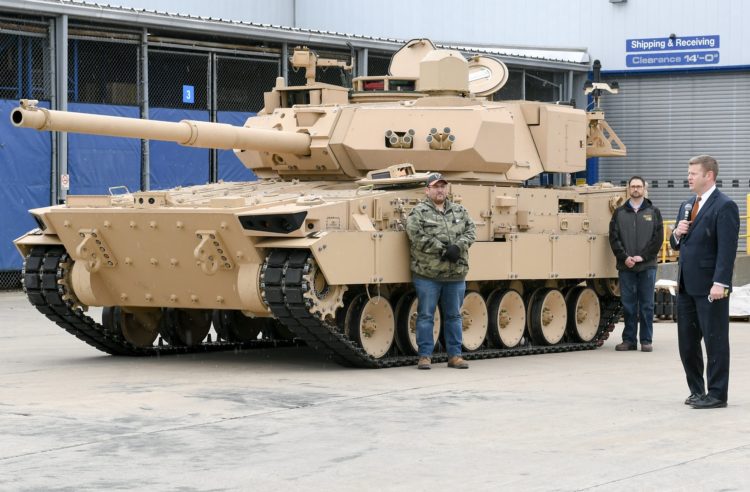 As the Army Secretary visited the company in April, a presentation was made of GD Land System’s new light battle tank, designed to integrate the Army’s MPF program.

Candidates for the MPF (Mobile Protected Firepower) program were given the go-ahead by the US Army, in September of 2018, and told to produce a prototype for evaluation. Eventually, dozens of prototypes will be created, for further testing and deployment in a relatively short period of time. Companies, such as GDLS, are also in charge of producing the vehicle which will be used to test their combat vehicles in operational environments. Shortly thereafter, both BAE systems and GDLS received their pre-production contracts, which covers development costs and lists the specifications which the vehicles must comply with.

Upon completion of pre-development contracts, the US Army intends to dispose of approximately combat 500 vehicles, to form the Mobile Protected Firepower unit, and possibly ramp up production from there.

The GDLS prototype bears much resemblance with the famous Abrams heavy tank, such as the turret, optics and engine. However, it is fitted with an automatic loading system, reducing the crew to three. By ordering such a vehicle, the US Army is experimenting off the beaten track of 4-man crews, by suppressing the loader. Four-man configurations require more manpower, reduce available tank space inside and can exert severe stress on the loader if he has to load entire volleys of shells, but makes the overall team more versatile. The 4-man configuration, such as the one applied by the Abrams heavy combat tank is still the reference within the US Army (and others), but the MPF program is intended to shed light as to which benefits a three-man team could yield, and where.

When the vehicle is ultimately chosen, the Army will initiate a small production contract (LRIP, Low-Rate Initial Production), presumably in 2023.