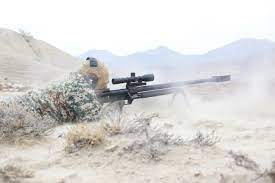 According to a report from Conflict Armament Research (CAR), Iranian military engineers and designers have managed to copy Austrian company Steyr Mannlicher’s Steyr HS .50 rifle and have delivered the same to conflict zones in the Middle East.

The report states that “Iranian AM-50 12.7 × 99 mm anti-material rifle”  which in 2004 was sold by Steyr Mannlicher to the Iranian government has been replicated by Iran.

The copy is now known as the AM-50 sniper rifle.

CAR’s report is a complete description of the Iranian AM-50 sniper rifle starting from its finished and assembled form to its complete disassembly and analysis to its last nut.

The analysis paints a clear view on ​​how Iranian engineers work in this field, their thinking, and the direction of Iranian production of local light automatic and semi-automatic weapons.

The authors of the report go on to note that the copy has inherent shortcomings due to systemic manufacturing defects, indicating that either different Iranian production facilities did not coordinate well their actions, or that their planning framework in the construction of the rifle has systemic issues.

The same applies to accessories for the sniper rifle as well. Case in point, the optical sight used with the AM-50 is not at all adapted to serve a long-range rifle or a rifle of a similar caliber.

“The level of threat posed by a weapon system depends greatly on the end user’s ability to maintain and operate it. In this case, mismatched critical components and a repaired bolt handle suggest improper care. Furthermore, the rifle was fitted with an optical sight unsuitable for military use. The poor mechanical condition of the weapon is compounded by production flaws, notably in the surface treatment applied to its aluminum and steel components. If better-maintained examples of the AM-50 are in use with trained operators, this weapon could pose a significant risk to personnel at ranges exceeding those of assault rifles,” states the report.

The CAR notes, the Iranians have successfully copied the Austrian HS .50 sniper rifle according to the capabilities of Iranian scientists. The AM-50 sniper rifle has been sold in various conflict zones, including in the Middle East.

The recipient of the sales are not government troops, but groups backed by Iran or those who follow Tehran’s policies, states the report.