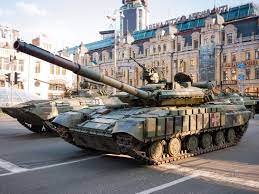 According to a statement by Ukraine’s state defense company UkrOboronProm, in recent weeks the main battle tank of the Ukrainian army T-64BV has received updates and is starting tests to verify its effectiveness.

The modernization of the T-64BV was carried out by the Kharkiv Armored Plant, which is part of Ukroboronprom. Following the upgrade, the T-64BV is now equipped with new third generation optical and guidance devices, anti-accumulation screens on the stern grille, and rubber shields on the tower. Its fuel system has also been improved with the fuel tanks receiving additional armor.

The T-64BV is designed to break through all kinds of fortified enemy positions, as well as provide military support for a mechanized ground army. It can also successfully cope well with firing points, armored vehicles, manpower.

According to Herman Smetanin, director of the Kharkiv Armored Plant, the updated T-64BV already has state-of-the-art communication systems, in line with NATO standards.

Although Ukraine has the capacity to produce T-84 tanks, it decided to upgrade the T-64, since it is a more cost-effective option. The T-64 tank is a Russian-Ukrainian production model from the Cold War era.

According to unconfirmed info, a little more than 2,200 T-64 tanks are in service with the Ukrainian army; of these at least 100 have been upgraded to the T-64BV version.

While the modernization process started in 2017, with the tanks receiving NBC protection, passive and explosive jet armor, as well as automatic fire extinguishing systems; although the engine received an upgrade with 850 horsepower, it failed to resolve some of the tank’s problems with manoeuvrability and speed continuing to be an issue. The reason for this could be the increased weight of the additional bumper.

Despite the upgrades, Kyiv has lost a significant number of tanks during skirmishes with rebels in eastern Ukraine, Donbas, and Luhansk. While the upgrades helped increase their survivability, the outdated design is a major limitation.