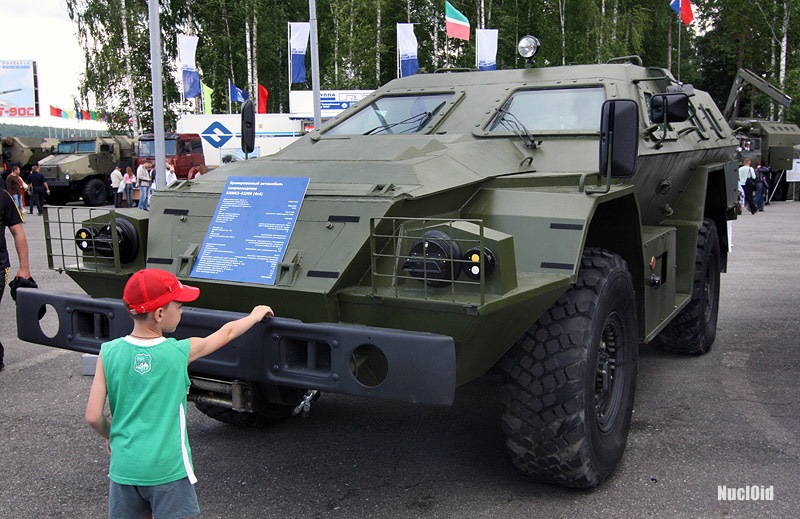 A user has posted an interesting photo on the Telegram social channel: the image shows a train pulling a convoy of newly built armor and equipment. If one were to look more closely, you can observe that the newly built armor that Moscow is reportedly sending to the war front has just been manufactured.

Experts have identified the armor as being the KAMAZ BPM-97 4×4 wheel anti-mine and ambush vehicle (MRAP). This is an upgraded version of the MRAP of the 1990s. Interestingly the serial production of the KAMAZ-43269 Vystrel-M began in May 2022.

In just five months we are seeing the first units fully loaded onto a train somewhere in central Russia and taken to the Ukrainian frontline.

The Vystrel-M is armed with a 30 mm 2А42 cannon,  its main gun. It is also equipped with a secondary armament, which is a PKT machine gun along with a AG-30 automatic grenade launcher.

The Vystrel-M is the last known modification of KAMAZ BPM-97. Despite its deceptive looks the Vystrel-M sports an armored windshield, an advanced air purification system and a new fire control system.

Its deployment to Ukraine and participation in the formation of the Russian army marks it combat debut.

According to the Telegram account, at least one such vehicle has already been spotted on the streets of Kherson. In addition to Russia, a more sophisticated version of the KAMAZ BPM-97 is also being used in Azerbaijan, Kazakhstan and Syria.

In the last 2 days, there is a heightened activity in terms of shipments of weapons and equipment from Russia to the Ukraine war front.

17 Iskander-M sub-ballistic missiles have been deployed into the war in Ukraine, going by social media posts. A few days ago, images of upgraded T-80 BVM main battle tank were also seen leaving Russia. A platoon of 152 mm Giatsint-S self-propelled guns have also left Russia and were seen moving towards the frontline in Ukraine.

There also have been reports that Moscow has deployed a Belgorod nuclear submarine. The sub can carry up to 6 Poseidon nuclear torpedoes.