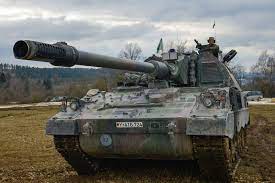 The situation with some Bundeswehr combat ground weapon systems continues to deteriorate. BulgarianMilitary.com reported a few days ago that the German army’s new and modernized Puma armoured personnel carriers failed completely during an exercise. The German Pumas stopped working after eight days of shooting. There have even been reports of ardent APCs.

It’s terrifying to think about what will happen to the Pumas in actual combat. And, just as the international community is beginning to accept the problem, a leak in a secret report by the German Ministry of Defense is about to rekindle public outrage. We’re talking about the German army’s infamous Panzerhaubitze 200 (PzH 2000) self-propelled howitzers.

The Bundeswehr (German Army) has 105 of these howitzers in its inventory. According to the report, 73 of the 105 were usable. However, the report also states that 50% of the 73 guns are combat ready. That is, the German army possesses 36 operational PzH 2000 self-propelled howitzers.

The Times officially published the information. According to the British publication’s German sources, 18 self-propelled howitzers have already been repaired. However, the information does not specify whether these 18 howitzers are from the defective batch or from the 36 serviceable PzH 2000s in question. If it is the latter, the situation in Germany’s artillery combat capability has reached rock bottom.

PzH 2000 has been fighting on the side of the Ukrainian Armed Forces for a long time. Berlin sent them to Kyiv in response to Russia’s invasion of Ukraine, which began on February 24 and has lasted nearly ten months.

With all of this information, the picture of the PzH 2000’s problems is beginning to emerge. Did Berlin supply Kyiv with defective howitzers, given that Kyiv has long reported problems with them on the battlefield? Almost certainly. For a long time, the German media has been writing about the problems with the howitzers delivered to Ukraine, and now it appears that even those in the Bundeswehr are problematic.

In Ukraine, for example, the fire control system was discovered to be defective. The problem stems from the loading mechanism of the self-propelled howitzer, which is under extreme strain. Ukrainians fire 300 rounds of ammunition per day with German PzH 2000 howitzers. This is also a problem because the Germans did not design the gun to be so heavily loaded.

However, this raises another issue. Spiegel reported several weeks ago that there was a scheduling error in the delivery of spare parts for Ukrainian howitzers. Germany was forced to “cannibalise” a PzH 2000 unit in order to supply spare parts to the Ukrainian armed forces.

German experts have already sent dire warnings to Berlin. The lack of spare parts for the PzH 2000 has already stymied the so-called repair centre that Germany hopes to establish in Slovakia by mid-December to repair weapons delivered there.

The Ukrainian war revealed something unexpected, but perhaps long hidden: a significant portion of German equipment is in poor condition. Leopard-2 tanks that were scheduled to be delivered to Poland as part of the circular exchange programme have not arrived. Berlin had promised at least 50 such tanks, but there were none, so it offered to replace them with Leopard-1s.

The public should not be surprised, because Berlin has not lied thus far. Despite public and Congressional pressure, Berlin has repeatedly stated that it cannot supply Ukraine with the weapons it requires. Berlin has repeatedly stated that stocks in Germany are low. Apparently, now is simply the time to shed light on the reasons for the German government’s inability to provide greater support to Ukrainian soldiers. It is, however, a disgrace for an economically stable Western European country to ignore its armaments.