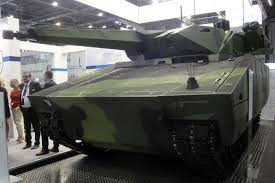 German defense giant Rheinmetall has unveiled the newest member of its armored vehicles, the Lynx 120.

The light tank is equipped with a basic 120mm smoothbore gun which has been adopted from the Leopard 2. The remaining firepower comes from the mechanized version of the Lynx KF 41, from which it has also borrowed the chassis.

According to the Dusseldorf-based company, the “Lynx 120 is a combined mix of mobility, firepower, lethality, and survival”; the Lynx 120 is lighter than its predecessor the Lynx KF 41.

Featuring integrated adaptive protection, the architecture of the Lynx 120 is based on the principle of “plug-and-play” (PnP), allowing quick cheap future upgrades. The PNP architecture also allows the vehicle to be quickly adapted to NATO standards under certain conditions.

“The Lynx 120 is a combat system providing maximum operational productivity, an advantage in logistics processes, and cost reduction” said Rheinmetall.

Such a combination of firepower, and defense technology, ensures high mortality for the enemy making the Lynx 120 desirable for the ground forces.

In fact, many countries have already shown interest in the Lynx 120 including Hungary, Australia, Slovakia, and the United States.

Hungary was the first country in the world to acquire the Lynx platform nearly two years ago.

The Lynx 120’s turret, its main cannon, is a 120mm smoothbore one which has been adopted from the Leopard 2 tank. It has been designed to work with several types of projectiles, including the DM11 programmable high-explosive (HE) ones.

The 120mm turret can rotate 360 degrees, along with the main optical system mounted on it. Day, night, and thermal imaging systems for tracking and detection have also been integrated into it. It is also equipped with periscopes suggesting that it has an integrated internal optical command post.

On the outside, the Lynx 120 has integrated ballistic protection modules to mitigates threats from explosive penetrators, improvised explosive devices, and artillery fire.

Its PNP architecture allows it to be quickly retrofitted with Rheinmetall’s Active Defense System, (ADS) which is designed to protect the light tank from anti-tank missiles and rocket-propelled grenades.

Although Rheinmetall has not provided any information about the engine, deductions can be made based on the fact that it is sitting on a KF41 chassis, which could mean that a Liebherr diesel engine capable of either 750hp (563kW) or 1,140hp (850kW) is powering the Lynx 120.

Assuming that it is using a Liebherr diesel engine, it can be safely assumed that it also uses either an Allison X300 series 6F/1R or a Renk HSWL 256 for automatic transmission. The Liebherr diesel is of the common rail type and fitted with a two-stage turbocharger and two-stage intercooler.